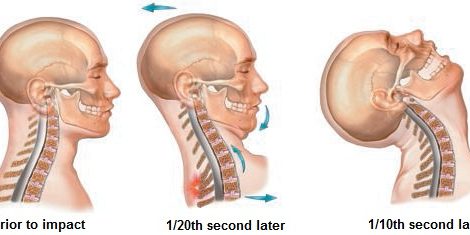 The term “whiplash” is used to describe a variety of neck injuries that often occur in rear-end crashes. The most common of these are mild muscle strain and minor tearing of soft tissue. Other injuries include nerve damage, disk damage and, in the most severe cases, ruptures of ligaments in the neck and fractures of the cervical vertebrae. Nerve damage, which can occur even when other injuries are mild, is probably responsible for long-term symptoms, such as headaches, dizziness and ringing in the ears.

Neck distortion resulting from sudden movement of the head relative to the torso is believed to explain most whiplash. Specifically, hyperextension of the neck, or rearward bending beyond its normal range of motion, likely causes many injuries. People can experience severe crashes with no neck injury if there is little or no movement of the head relative to the torso.
However, experimental and field studies suggest that even slight neck bending that falls well short of hyperextension can cause nerve damage. One hypothesis is that such damage is caused by motion of adjacent neck vertebrae during a crash. 1 Another hypothesis is that it is caused by fluctuation in spinal fluid pressure arising from neck distortions [2].

2. How common are neck injuries? What kinds of crashes do they occur in?

Neck sprains and strains are the most frequently reported injuries in U.S. insurance claims. In 2007, an estimated 66 percent of all insurance claimants under bodily injury liability coverage and 57 percent under personal injury protection coverage — two important insurance injury coverages — reported minor neck injuries. 3 For 43 and 34 percent of bodily injury liability and personal injury protection claimants, respectively, neck sprains or strains were the most serious injuries reported. The cost of the claims in which neck pain was the most serious injury was about $8.8 billion, representing approximately 25 percent of the total dollars paid for all crash injuries combined.

Whiplash injuries can be sustained in any type of crash but occur most often in rear-end collisions. Based on National Automotive Sampling System data, the National Highway Traffic Safety Administration (NHTSA) estimated that there were 805,581 whiplash injuries occurring annually between 1988 and 1996. Of these injuries, NHTSA estimated that 272,464 occurred as a result of a rear impact. 4 A 1999 Institute study found that 26 percent of drivers of rear-struck vehicles reported neck injuries to their insurance company. 5 This was about the same as the 24 percent neck injury rate reported in a 1972 Institute study. 6 Estimates of neck injury rates in other studies have ranged from 7 to 37 percent, depending on whether police or motorists reported the information. 7, 8, 9

What many motorists refer to as a headrest is actually a head restraint. These aren’t comfort features, but rather essential safety components like safety belts and airbags. When a vehicle is struck from the rear it is accelerated forward, causing the seatback to push against the occupant’s torso and propel it forward. An unsupported head lags behind the torso until the neck reaches its limit of distortion. Then the head is suddenly accelerated by the neck much like the tip of a whip; hence the term whiplash.

Effective head restraints help move an occupant’s head forward with the body in a rear-end crash and decrease the likelihood of a whiplash injury.

As the vehicle accelerates forward from the starting position, the seatback pushes the occupant forward. If the head is unsupported (top sequence), then the neck bends rearward. Eventually the seatback springs forward, pushing the body ahead of the neck during rebound.

4. What factors influence the severity of neck injury?

The majority of studies on whiplash have focused on adult front-seat occupants. Unless otherwise noted, the following facts pertain to people sitting in front.
Height: According to German research, height is a risk factor for neck injury, particularly among females. 10 Shorter people often are protected by unadjusted head restraints. Stature may not play as big a role in the severity of injuries among males because many head restraints are too low to protect even shorter males. Taller motorists who do not adjust their head restraints are more likely to sustain whiplash injuries.

Gender: The same German report found females to be 1.8 to 2.2 times more at risk of neck injury in all types of collisions, a finding consistent with research by the Institute and other organizations. A Swedish study found that females with whiplash injuries were more likely to develop long-term symptoms. 11 Fifty-five percent of females who sustained whiplash injuries went on to develop long-term symptoms compared with 38 percent of males. The risk of disability for drivers has been shown to be 3 times as high for females as for males; in rear seats, females’ risk is 4 times as high. 12 One possible explanation is that males have more neck musculature than females for about the same size head. The Institute studied insurance data and found female drivers in a rear-end crash were more likely than male drivers to report a neck injury. 5, 13

Seating position: It is uncertain which seating position exposes an occupant to the greatest chance of neck injury. One study concluded that drivers have a higher risk of injury than passengers. 14 It was hypothesized that drivers are prone to move forward and away from the seatback as they reach for the steering wheel and observe traffic around them, whereas passengers usually are more relaxed and lean further back in their seats, with their heads closer to the restraint.

Vehicle size/weight: The size and weight of the struck and striking vehicles may influence neck injury risk. A study of insurance claims found that drivers struck by vehicles heavier than the one they were driving were more likely to claim neck injuries than drivers struck by vehicles of approximately equal or lesser weight. 13 Drivers of rear-struck cars were more likely to claim a neck injury than drivers of rear-struck SUVs.

Seat/head restraint geometry: Restraints can be classified into one of four geometric zones defined by their height and backset (distance from the back of the head to the front of the restraint). Based on these factors, the Institute assigns ratings of good, acceptable, marginal or poor. Institute research has shown that vehicles with geometric head restraints rated good have 24 percent lower driver neck injury rates than vehicles with restraints rated poor. 5

5. Do head restraints have to meet government standards?

Yes. NHTSA has mandated head restraints in the front outboard seats of all new passenger cars since 1969. Head restraint standards were extended to pickups, vans and SUVs in 1991. Manufacturers may install either of two types of restraints. The first is an integral head restraint, in which the seat back itself is high enough to meet the head restraint height requirement. The second type is an adjustable head restraint consisting of a cushion attached to the seat back by sliding metal shafts. Adjustable restraints can be moved and sometimes locked at different heights; some also can be adjusted horizontally to change the distance between the back of the head and the restraint.

As of September 2010, all vehicles in the U.S. must meet an updated standard that requires head restraints that are higher and closer to the back of people’s heads than previously mandated.

6. How should my head restraint be positioned?

The distance from the back of the head to the restraint should be as small as possible, preferably less than 4 inches. On seats without horizontally adjusting head restraints, this can be achieved by adjusting the seat’s recline angle.

7. Where do I find information about which vehicles have better head restraints?

The Institute evaluates head restraints and seats for rear crash protection as part of its vehicle ratings program. Ratings are determined by first classifying restraints into one of four geometric zones defined by height and backset. Measurements are made with a dummy representing an average-size adult male with the seatback set at a typical angle. Restraints are rated good, acceptable, marginal or poor. Restraints rated acceptable or good can protect motorists of various statures, while head restraints with marginal or poor geometry cannot begin to protect many taller people from neck injury. Since 2004, head restraints with good or acceptable geometry also have been rated with a dynamic test simulating a rear impact using a dummy with a realistic neck and spine. The rating from the dynamic test is combined with the geometric rating to produce a seat/head restraint overall evaluation. The Institute doesn’t dynamically test head restraints with marginal or poor geometry ratings because they wouldn’t adequately protect most people from whiplash.

A head restraint measuring device is used to assign a geometry score based on values shown in the table overlay.

8. Do newer vehicles have better head restraints than older ones?

9. Are the Institute’s head restraint ratings reflected in real-world crashes?

Yes. In 1999 the Institute analyzed more than 5,000 insurance claims and determined that, all other factors being the same, drivers with head restraints with good geometric ratings were 24 percent less likely than drivers with poor-rated head restraints to sustain neck injuries in rear-end crashes. 5 In vehicles with restraints with acceptable geometry compared with vehicles with poor geometry, insurance claims for neck pain were lower for females but not for males. This may be because females generally are shorter, allowing a lower head restraint to offer some protection.

A second Institute study conducted in Rochester, New York, in 2000 surveyed 585 drivers who had been in rear-end crashes. 15 Measurements were taken while each driver assumed a normal driving posture with their restraints positioned as they were in the crash. The findings showed that head restraints positioned at or above the head’s center of gravity reduced reported neck pain after a rear-end crash. Drivers with such restraints reported 40 percent fewer instances of neck pain than those with poorly positioned restraints. A 2005 Highway Loss Data Institute report found that personal injury protection claims were reduced by an estimated 11-22 percent for passenger cars with head restraints with good geometry compared with restraints with poor geometry. 16

next4 Reasons To See a Chiropractor After a Car Accident

Our chiropractors serve patients located in Bellevue, Lakewood and Federal Way. All three of our clinics provide each patient with a high quality of service at a top-notch facility. Our three convenient locations are open from Mondays to Fridays from 9:00AM to 7:00PM and Saturdays from 9:00AM to 12:00PM.

Get exclusive updates about our upcoming community events, discounts, promos and more.